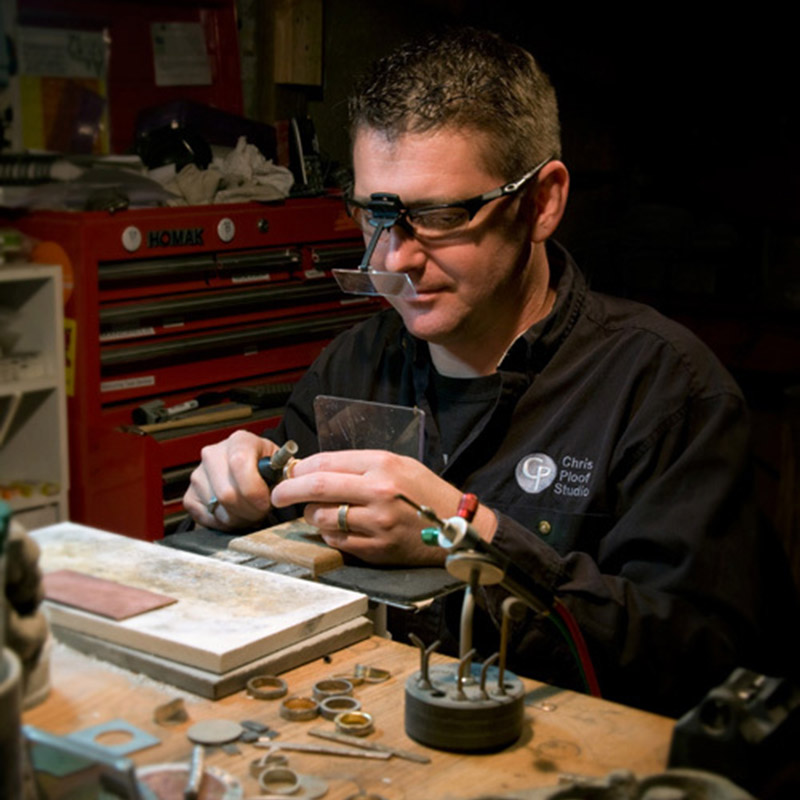 Hailing from a small town in Massachusetts, award winning master jeweler Chris Ploof was once a skinny boy lurking around the local living history museum, watching awestruck as the craftspeople manipulated what had previously seemed unyielding: glass, tin, iron. All the while, his spirit was fusing itself to the use of heat and tools to ingeniously create utility and elegance.

After traveling the world trying hands-on careers that spoke to his historical influences and technical skills, Chris found himself back on his boyhood path, attempting to make a forge improvised by a 55 gallon drum, some fire bricks and a hair dryer. Eventually his knowledge seeking lead him to jewelry making classes. At last, he was home.

Chris has studied with many well-known artists, and apprenticed under a master goldsmith. He has an insatiable curiosity and drive that lead him down long roads even after the challenges at hand have been met. “Impossible is only a temporary condition,” he likes to say. “If my customer wants a Damascus bathtub, we will make it for them.” This intense drive is balanced with a wry, wonderful sense of humor that is one of his greatest assets when things don’t go as planned. “Sometimes my best discoveries come from my biggest mistakes,” he admits.